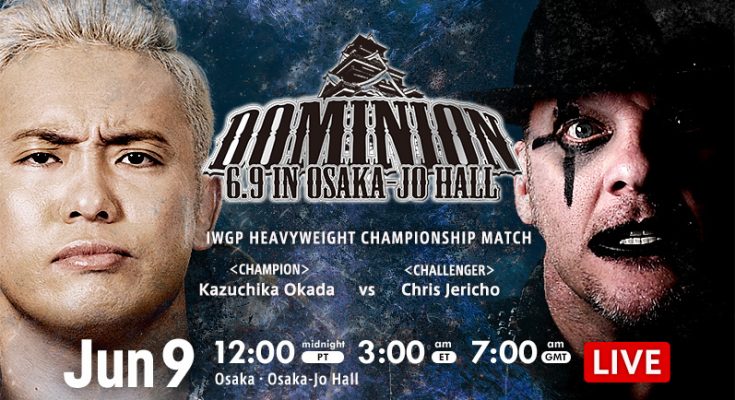 Dominion is arguably New Japan’s second biggest show of the year after WrestleKingdom. That means some major stories will be resolved and some may be started.

IWGP US Champion Jon Moxley p. Shota Umino with a Death Rider – Umino kicked the match off by diving to Moxley on the floor before the bell. Back in the ring Umino hit a missile dropkick for a two count. After that, it was pretty much all Moxley.

After the match, Moxley took the mic and cut a promo saying he wants to be in G1 this year. He then helped Umino to the back, which was a bit odd given that he comes across as a heel.

Shingo Takagi p. Satoshi Kojima with Last of The Dragon – Kojima tossed Takagi to the floor and hit a plancha. The two brawled on the floor and nearly got counted out. They fought on the apron for the obligatory big match apron bump. This time it was Kojima DDTing Takagi on the apron. Takagi battled back and traded clotheslines. Kojima no sold a Pumping Bomber and went for his own clothesline. Takagi countered with another clothesline, but only got a one count. A Made In Japan slam got a two count. Takagi then surprisingly hit Last Of The Dragon for the pinfall.

After the match, Takagi took the mic and also declared the he wants in this year’s G1.

Jushin Thunder Liger & YOSHI-HASHI b. Minoru Suzuki & Zack Sabre Jr. of Suzuki-Gun when Hashi pinned Sabre with Karma – Of course, the heels attacked before the match because that’s what heels do. Yoshi took the brunt of the assault and got worked over when the match got back in the ring. Both heels tauntingly kicked him. Hashi kicked out of a Penalty Kick. When he did so, even Liger ran in and kicked him in the shoulder as a wake-up call. Liger finally got the tag and went toe to toe with Suzuki, which resulted in a double-down. Yoshi and Sabre respectively tagged in. For a time the heels had both babyfaces in submission holds. Hashi managed to break free, and hit karma on Sabre for the upset win.

Hiroshi Tanahashi, Juice Robinson, & Ryusue Taguchi b. Bullet Club (Jay White, Taiji Ishimori, & Chase Owens w/Gedo) when Tanahashi pinned Owens – Somehow I missed this match in my earlier preview, but I would have predicted Bullet Club to win. The babyfaces did well until the heels stormed the ring. Everybody brawled on the floor. When the match went back in the ring, Tanahashi got the hot tag and ran wild. Again, the heels stormed the ring and knocked Juice and Taguchi to the floor. Owens tagged in and went for the kill with a Package Piledriver while everybody else brawled on the floor. Tanahashi avoided the Package Piledriver, and hit a Final Cut-like move and got the pin.

Tomohiro Ishii p. NEVER Openweight Champion Taichi w/Miho Abe with a Brainbuster to win the title – Taichi kept stalling on the floor to the point where Ishii laid down in the ring and beckoned him to get in. Taichi did so and stomped Ishii to no response. When Taichi went for a pin, Ishii roared to life and started fighting. Both men exchanged dueling strikes, which Taichi surprisingly won. Taichi controlled the match for the next few minutes. Ishii started his comeback and the two exchanged clotheslines. Taichi locked in the Stretch Plumb, but Ishii did not submit. Ishii kicked out of the Last Ride powerbomb. Ishii hit a Sliding Lariat for another two count, then finished off Taichi with a Brainbuster.

IWGP Tag Team Champions The Guerrillas Of Destiny (Tama Tonga & Tanga Loa) b. EVIL & SANADA of Los Ingobernables De Japon when Tonga pinned Evil with a roll-up – A lot of trash talk at the beginning before the match picked up. Sanada put Loa in the Paradise Lock and hit planchas on both Tonga and Jado. Evil got Tonga in a Sasori-Gatame, but Loa made the save. LIJ signaled for the Magic Killer. Again, Loa made the save. Sanada put Loa in the Skull End while Evil reapplied the Sharpshooter to Tonga. Right before Tonga tapped, Jado yanked the referee out of the ring and hit Evil with his shinai. Bushi ran in for the save and took care of Jado. However, Tonga still managed to escape the Magic Killer, and rolled up Evil with a handful of tights. The referee did not see the tights being pulled and counted the fall.

Katsuyori Shibata’s music played, which was clearly a surprise to the crowd. He motioned to the stage where KENTA (the former Hideo Itami) made his return. KENTA stated that he wanted to prove himself again in the G1.

Will Ospreay p. IWGP Junior Heavyweight Champion Dragon Lee with a Stormbreaker to win the title – The two shook hands before the bell. Ospreay was in control for the first few minutes. Then Dragon hit an insane suicide dive that knocked Ospreay across the announce table. Ospreay responded by hitting a Phoenix Splash to the outside. Back in the ring, Dragon reversed a Stormbreaker into a DDT, while Ospreay reversed a Desnucadora into a Stunner. A ton of exchanged strikes and reversals. Dragon tried to hurricanrana Ospreay to the floor, only for Ospreay to land on his feet. Lee tried another hurricanrana, but Ospreay turned it into a powerbomb for the obligatory big match apron bump. Lee kicked out of a Shooting Star. Ospreay went to the top again for another move. Lee met him at the top and managed to put Ospreay in the Tree Of Woe for a footstomp. Ospreay barely made it back in the ring at 19. Lee followed up with a Canadian Destroyer and a Knee Strike. Ospreay kicked out and escaped a Desnucadora attempt. Ospreay then hit an Oscutter off the middle rope and turned that into a Stormbreaker to get the pin and his third IWGP Junior Heavyweight Championship. A heckuva match.

The two men hugged after the match, and Lee strapped the belt on the new champion. Now THAT’s a babyface!

Tetsuya Naito p. IWGP Intercontinental Champion Kota Ibushi with Destino to win the title – Lots of heat for Naito early on. The opening minutes saw Naito repeatedly stomp and taunt Ibushi. Naito hit a back suplex on the apron for the obligatory big match apron bump. Ibushi’s head smacked against the apron as he went to the floor. Very scary looking. Ibushi still beat the count into the ring. Naito placed him on the turnbuckles for a top rope reverse hurricanrana for a near fall. Naito went for the kill with Destino, but Ibushi reversed into a Tombstone Piledriver for a double down. When Ibushi made it to his feet, he and Naito traded strikes. Ibushi started making his comeback and leveled Naito with a spinning clothesline. Naito dodged a running knee strike and hit a Dragon Suplex. Naito hit Destino, only for Ibushi to kick out. Naito went for another Destino. This time, Ibushi caught him and hit a GTS. Ibushi followed up with a Last Ride Powerbomb for another two count. Naito countered a Kamagoye with a DDT. Ibushi kicked out of an inverted Tornado DDT. Again Naito went for Destino and Ibushi caught him. Naito turned that into another reverse hurricanrana. Finally, Naito was able to hit a Destino and pin Ibushi for the win.

IWGP Heavyweight Champion Kazuchika Okada p. Chris Jericho with a roll-up to retain the title – The two locked up, and when Okada did his trademark clean rope break, Jericho immediately thumbed him in the eye. Jericho took the match to the floor where he DDT’d Okada on a table. Jericho continued the assault in the ring. At the ten minute mark, Okada hit a flapjack and started his comeback. Back out on the floor, Okada tried a cross body that Jericho reversed into a Codebreaker. Back in the ring, Jericho applied a Boston Crab. Okada made the rope break. The two went back and forth for the next several minutes, with neither man getting a clear advantage. Jericho got increasingly frustrated, and removed a turnbuckle. He tried to drop Okada on the exposed turnbuckle. Okada reversed into a German Suplex, and got a two count with his own Codebreaker. At the 25 minute mark, Okada escaped a Lion Tamer. Jericho tried to reverse a Rainmaker into a roll-up, but Okada blocked it and sat down to get the surprise pin.

Almost immediately after the match, Jericho beat down Okada. He wrapped a chair around Okada’s neck and smashed him against the ringpost. Hiroshi Tanahashi made the save and chased Jericho away. Jericho took the mic and taunted Tanahashi, so it looks like we’ll get a Tanahashi/Jericho match soon.