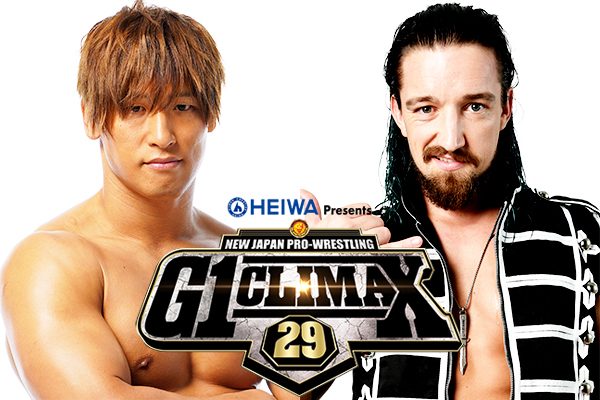 Karl Fredericks & Clark Connors b. Yota Tsuji & Ren Narita when Connors submitted Tsuji with a Boston Crab – The story for this match is simple. Tsuji and Narita are from the New Japan Dojo while Connors and Fredericks are from the LA Dojo. Fredericks charged in right at the bell and was met with a Tsuji Dropkick. Narita and Connors traded mat holds. Narita looked to have the better mat game because Connors immediately resorted to brawling. Narita got cut off and worked over. At last, he hit a desperation release Belly To Belly Suplex and tagged in Tsuji, who ran wild for a bit. In the end, Connors locked in a Boston Crab. Tsuji lingered for several minutes before finally submitting.

Jyushin Thunder Liger, Tiger mask IV, & Jeff Cobb b. Suzuki-Gun (Lance Archer, Taichi, & Yoshinobu Kanemaru) when Cobb pinned Kanemaru with Tour Of The Islands – The heels attacked before the bell and focused on Liger right off the bat. Liger rallied and tried to use the surfboard on Kanemaru, but Archer broke it up to the chagrin of the crowd. The heels cut off Tiger and worked him over. Archer did the Old School rope walk but used a Moonsault to take Cobb down. Kanemaru went for the Deep Impact DDT on Cobb, who caught him and suplexed him overhead. A Tour Of The Islands from there and it was all over.

CHAOS (IWGP Junior Heavyweight Champion Will Ospreay, Sho & Yoh) b. Bullet Club (Taiji Ishimori, Yujiro Takahashi & Chase Owens) when Ospreay pinned TTakahashiwith Stormbreaker – The babyfaces cleared the ring but were denied the triple dive to the floor. The heels cut off Yoh and worked him over. Sho got the hot tag and ran wild. Ospreay and Takahashi went at it until Ospreay fell to triple teaming. The babyfaces returned the favor on Takahashi and hit dual dives to the outside while Ospreay hit Stormbreaker on Takahashi.

Juice Robinson & Toa Henare b. Jon Moxley & Shota Umino when Henare pinned Umino with a Uranage – Not surprisingly the fight broke out right away. Juice got cut off and worked over. Henare got the tag and went back and forth with Umino. Moxley intercepted Henare’s attempt at a tackle with a shoulder block. Juice stopped a double team attempt by the two which allowed Henare to make a comeback and hit his Uranage for the win.

After the match, Moxley attacked Juice and put him through a table.

Los Ingobernables De Japon (IWGP Intercontinental Champion Tetsuya Naito, EVIL, SANADA, BUSHI, & Shingo Takagi) b. Hirooki Goto, Tomoaki Honma, NEVER Openweight Six-Man tag Champions Ryusuke Taguchi, Togi Makabe, & Toru Yano when Sanada pinned Honma with a moonsault – The babyfaces did well until Evil tripped Taguchi. Then the heels barged in and toppled everybody to the floor. Sanada placed Yano in the Paradise Lock on the floor. Meanwhile, the rest of LIJ got the heat on Taguchi. Goto got the tag and hit Sanada with the Ushigoroshi. Honma hit the Kokeshi too. LIJ once again took the fight to the floor, leading to a big multi-man brawl. Sanada and Honma were left in the ring, and Sanada got the win with a moonsault.

Bullet Club (Bad Luck Fale, IWGP Heavyweight Tag Champions Tama Tonga & Tanga Loa) b. NEVER Openweight Champion Tomohiro Ishii, YOSHI-HASHI, & KENTA when Tonga pinned Ishii with a Frog Splash – Hashi did surprisingly well for the opening moments, but eventually, he got felled by Fale’s power. The heels got the heat on him until Ishii got the hot tag. Ishii ran wild for a while but made the mistake of charging into Fale. He bounced off Fale like a rubber ball. The heels seized the moment to gang up on him. Ishii desperately went to tag Kenta. In a shocking turn, Kenta dropped off the apron and didn’t tag. Eventually, the numbers caught up with the babyfaces and the beatdown began. Kenta jumped into the ring like he was going to make the save only to turn on Ishii. He hit the GTS on Ishii and let Tonga hit a frog splash to get the pin.

After the match, the heels beat down the babyfaces. The crowd is LIVID! Then Katsuyori Shibata ran out for the save and the crowd went wild. Shibata cleaned house on the heels. But like before, the numbers were too great and he too got beat down. Kenta then made it official that he was in Bullet Club. All the heels posed over Shibata before leaving.

Minoru Suzuki & Zack Sabre Jr. of Suzuki-Gun b. IWGP Heavyweight Champion Kazuchika Okada & Hiroshi Tanahashi when Suzuki pinned Okada with the Gotch Piledriver – This was effectively a fight between two singles wrestlers than a true tag match. Sabre and Tanahashi squared off in the ring while Suzuki did so with Okada on the floor. Still, the heels cut off Tanahashi and got the heat on him. With no Okada to break the holds, both heels used submissions at the same time. Okada finally got the hot tag and ran wild. Tanahashi stopped Suzuki from submitting Okada by kicking him several times. This got the four-way brawl going again between the same guys. Okada hit the Savage Elbow on Suzuki and signaled for the Rainmaker. Suzuki blocked and the two exchanged dueling strikes. Suzuki got Okada in the Rear Naked Choke. Tanahashi tried to break it up, but Sabre intercepted him and grounded him with another submission. Suzuki hit the Gotch Piledriver and pinned Okada.

After the match, Suzuki cut a heel promo demanding that he be given the IWGP Title.

G1 Climax FINALS: A Block Winner Kota Ibushi p. B Block Winner Jay White with a Kamigoye – White, who claimed it would be one on one yesterday, came to the ring with all the present Bullet Club members. Fortunately, Red Shoes banned them all except Gedo. White still left the ring right at the bell and taunted Ibushi to follow him out. Ibushi didn’t fall for it and stayed put. Gedo tried to grab Ibsuhi’s leg for the distraction. Red Shoes saw this and immediately ejected Gedo. As White protested, Ibshi grabbed him and tossed him back in the ring. Ibushi got the shine battling White all over the ring. White managed to clip Ibushi as he climbed to the top. White then took the fight to the floor and concentrated on Ibushi’s leg. He smashed it with the barricade, did a figure four around the post, and used leglocks inside the ring. White dominated for the next several minutes. White began overtly taunting Ibushi as he tortured him. Ibushi fired up and made his comeback at the 15-minute mark. White responded by shoving Ibushi into Red Shoes, and the referee toppled out to the floor. Gedo returned to the ring and got a chair. After using the chair on Ibushi’s leg, White put Ibushi in the inverted Figure Four. After several minutes, Ibushi was finally able to make the rope break and started his one-legged comeback. Ibushi went for the Boma Ye, White collapsed to the mat. Red Shoes stepped in to look at White. Behind Red Shoe’s back, Gedo tried to sneak up on Ibushi. Ibushi saw him and kicked him to the mat. He then hit the Boma Ye on White. Rocky Romero removed Gedo from the ring as Ibushi hit a second Boma Ye. White kicked out and escaped a Kamigoye. White hit a Blade Runner but did not make the cover. He lifted Ibushi back up for a Brainbuster and another Blade Runner. Ibushi dodged the Blade Runner and hit three straight Kamigoyes. Somehow White STILL kicked out. That didn’t last long though, as Ibushi simply hot a fourth Kamigoye and got the pin at last. This makes Ibushi the first man to win Best Of The Super Juniors, The New Japan Cup, and The G1 Climax.

Ibushi took the mic and cut the customary show-closing promo thanking the fans.