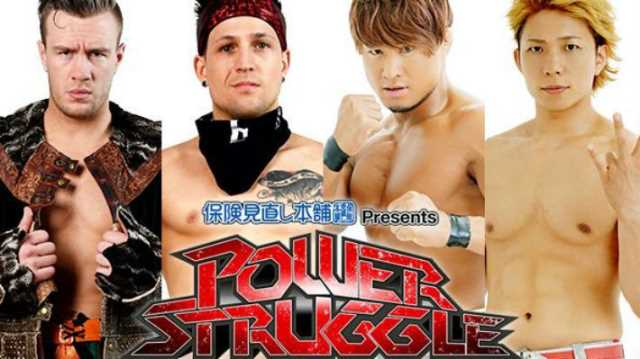 Night 2 of the Super Junior Tag League is here and will make up the second half of the show. The first half will be undercard tag matches as previews for matches at Power Struggle.

Tomoaki Honma & Karl Fredericks b. Jyushin Thunder Liger & Yota Tsuji when Fredericks submitted Tsuji with a Half Crab – Fredericks got double teamed in the opening minutes. Honma tagged in at about the five-minute mark and fought to a double-down with Liger. The two young lions tagged in and Tsuji put Fredericks in a Half Crab. Honma broke the pin, which allowed Fredericks to use his own Half Crab to submit Tsuji.

Los Ingobernables De Japon (Tetsuya Naito, EVIL, SANADA, & Shingo Takagi) b. Suzuki-Gun (Minoru Suzuki, Zack Sabre Jr., Taichi, & DOUKI) when Takagi pinned Douki with a Pumping Bomber – Surprisingly, there was no brawl before the bell. Sanada got cut off and worked over. Evil got the tag and went toe-to-toe with Suzuki before tagging in Takagi. Suzuki quickly tagged in Douki and a multi-man brawl broke out. While everybody else brawled on the floor, Takagi hit a Pumping Bomber to get the pin on Douki.

Bullet Club (IWGP Intercontinental Champion Jay White, NEVER Openweight Champion KENTA, & Yujiro Takahashi) b. Tomohiro Ishii, Hirooki Goto, & Toa Henare when Takahashi pinned Henare with a Pimp Juice DDT – This time, the babyfaces attacked before the bell and took the match to the floor. They probably did this to avoid White’s usual antics of starting the match only to tag out before doing anything. It worked because Goto battered White from pillar to post. Still, despite taking the beating, White managed to trip Goto to the floor where the heels took over. They got the heat on Goto until Ishii tagged in took the fight to KentaThey fought to a double down and tagged in Henare and Takahashi respectively. Everybody battled on the floor, leaving Ishii and Takahashi as the legal men. Soon after, Henare got hit with a Pimp Juice DDT and pinned.

SuperCoach (Ryusuke Taguchi & Rocky Romero) (1-0, 2) b. Tiger Mask IV & Yuya Uemera (0-1, 0) when Taguchi pinned Uemera with a Dodon – Romero came to the ring wearing a Black Tiger mask since Black Tiger was one of Tiger Mask’s rivals. The teams went back and forth early on with neither team gaining a sustained advantage. The coaches seemed to have some miscommunications which they literally kicked each other over. Umera made a comeback and put Taguchi in a Boston Crab while Tiger kept Romero at bay with a Rings of Saturn. Romero still managed to keep Taguchi from tapping out so he could make it to the ropes. Uemera got a few near falls with very quick reversals, but in the end, he fell to a Dodon.

Volador Jr. & Titan (1-0, 2) b. TJP & Clark Connors (0-1, 0) when Titan pinned Connors witha Doublestomp – The teams were evenly matched at ths start, with each of them tagging frequently. TJP avoided a Doomsday Device and hit a superplex on Titan. At the 10-minute mark, TJ and Connors double teamed Titan and Connors put him in a Boston Crab. Volador broke it with a kick. Volador dove onto TJP to keep him out of the ring while Titan rallied and hit his double Footstomp to get the pin on Connors.

El Desperado & Yoshinobu Kanemaru of Suzuki-Gun (1-0, 2) b. IWGP Junior Heavyweight Champions Taiji Ishimori & El Phantasmo (1-0, 2) when Desperado pinned Ishimori with a Pinche Loco – Since both teams are heels, it wasn’t surprising that the fight broke out before the bell. Naturally, both teams tried to out-cheat each other as well. Ishimori hit the Bloody Cross on Desperado but Kanemaru yanked Red Shoes out of the ring before the count. With Red Shoes down, Phantasmo low-blowed both opponents. He tried to hit Desperado with the belt but Kanemaru stopped it with his own low-blow. Desperado blocked a low-blow by Ishimori with the belt and hit the Pinche Loco to get the pin.

Roppongi 3K (Sho & Yoh) (0-1, 0) p. Birds Of Prey (IWGP Heavyweight Champion Will Ospreay & Robbie Eagles) (0-1, 0) when Yoh pinned Eagles with a roll-up – Both teams were babyfaces and shook hands before the match. The match started slow with each team feeling each other out. The Birds cut Yoh off and worked him over. Sho got the tag and cleared the ring. Sho and Ospreay traded moves and battled to a double-down. Both partners tagged in and had a very exciting exchanged of moves. Eagles hit a Sliced Bread for a two-count and transitioned right into the Ron Miller Special. The Birds then hit an assisted Sliced Bread for another near fall. They positioned Yoh for a Spanish Fly but Yoh tossed Ospreay to the floor. Sho then grabbed Eagles and hit a Falcon Arrow. Ospreay broke the pin. At the 20-minute mark, Eagles tried a 450 on Yoh, who put his foot up. Eagles somehow managed to land on his feet to avoid the boot and hit a Turbo Backpack. Yoh and Eagles reversed several roll-ups, but it was Yoh who finally managed to hold on and get the three count. A great match neither team deserved to lose, and neither team lost anything by losing.