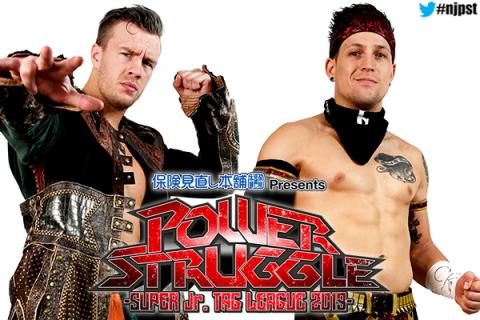 The Super Junior Tag League continues and approaches its middle stretch. Several matches happened during the house show tour, so I will simply list the results here.

Which brings us to tonight.

Toa Henare p. Yota Tsuji with a Uranage – A good but simple opening match that showcased the Young Lions.

Suzuki-Gun (Minoru Suzuki, Taichi, Zack Sabre Jr., & DOUKI) b. Los Ingobernables De Japon (Tetsuya Naito, SANADA, BUSHI, & Shingo Takagi) by DQ when Naito used a microphone stand as a weapon – Suzuki-Gun attacked before the bell to jumpstart the match. Taichi taunted Naito over the mic as the brawl erupted. They got the heat on Naito for several minuted before Takagi got the hot tag. Once again Takagi and Suzuki traded strikes, which really makes me want to see a match between them. Sanada and ZSJ traded moves, as did BUSHI and Taichi. Suzuki-Gun managed to cut off Bushi and team up on him before Takagi and Sanada made the save. Naito finally returned to the ring with Taichi’s mic stand and cleared the ring with it for a blatant disqualification.

After the match, Naito took the mic and told Taichi that the match is on and he will beat Taichi on his way to becoming a double champion. It’s worth noting that Taichi was laughing on his way to the back, like he was happy he enraged Naito.

Hirooki Goto, Tomohiro Ishii, Tomoaki Honma, & Karl Fredericks b. Bullet Club (IWGP Intercontinental Champion Jay White, NEVER Openweight Champion KENTA, Yujiro Takahashi, & Gedo) when Goto pinned Gedo with a GTR – The babyfaces got the shine by working over Gedo, but the heels managed to cut Honma off for the heat. Ishii got the hot tag and focused on Kenta. Goto and White got the double-tag which saw White unload with several strikes. Goto shook them off and went on the offensive. White avoided an Ushigoroshi and used the referee as a shield so he could strike with a DDT. As soon as Goto tried a comeback, White tagged out to Gedo. After a quick multi-manb exchange of moves, White tried to strike from behind on Goto. This time, Goto was ready and reversed into a GTR. He then hit Gedo with another GTR to get the pin.

The rest of the matches are Tag League matches.

The Birds Of Prey (IWGP Junior Heavyweight Champion Will Ospreay & Robbie Eagles) (2-2, 4) b. Tiger Mask IV & Yuya Uemera (0-4, 0) when Eagles submitted Uemera with a Ron Miller Special – The Birds worked over Uemera until Tiger got tagged in and made a comeback. Tige tried for a Butterfly Suplex off the top which Ospreay avoided. Eagles got the tag but Tiger was ready for him. While Tiger was ready to lower the boom on Eagles pleaded for a tag. Tiger tought for a second, then obliged. Uemera hit a release Belly-To-Belly Suplex for a two-count. Eagles tried a Turbo Backpack, only for Uemera to reverse into a Half Crab. Ospreay managed to make the save and take Tiger to the floor. This allowed Eagles to recover and use the Ron Miller Special for the submission victory.

El Desperado & Yoshinobu Kanemaru of Suzuki-Gun (2-2, 4) TJP & Clark Connors (0-4, 0) when Desperado submitted Connors with the Stretch Muffler – The heels cut Connors off and got the heat on him. TJP got the hot tag and made the comeback. At one point, both babyfaces had both heels locked in submissions. However, the heels managed to escape and Kanemaru managed to spit whisky in Connors’ eyes to prevent him escaping Desperado’s Stretch Muffler. With no save in sight, Connors submitted.

IWGP Junior Heavyweight Tag Champions Taiji Ishimori & El Phantasmo (3-0, 6) Volador Jr. & Titan (3-0, 6) when Phantasmo pinned Titan with a CR2 – The luchadores got the shine off the bat, but the heels took control and repeatedly tried to unmask Titan. The babyfaces rallied, with both Volador and Titan hit splashes off the top for a two-count. At the 10-minute mark, Titan got cut off. Phantasm failed to pin Titan with a frog splash, so he quickly pulled down Titan’s mask and hit a CR2 for the underhanded win.

Supercoach (Ryusuke Taguchi & Rocky Romero (3-0, 6) b. Roppongi 3K (Sho & Yoh) (2-2, 4) when Romero pinned Sho with a Small Package – The story here is that Roppongi 3K are Rocky’s proteges, so it’s a case of students meeting their master. The teams were evenly matched for the opening minutes. 3K got some momentum and worked over Romero. Taguchi made a comeback before he and Sho battled to a double-down after the 10-minute mark. Rocky tagged back in and hit the forever clotheslines. A four-way broke out when Romero used the armbreaker of Yoh. Supercoach hit a Double Hip Attack and looked to finish off Sho when Yoh made the save. 3K hit double knee thrusts on Romero and a double superkick on Taguchi. 3K hit a top-rope double team n Romero, but Taguchi managed to make the save. He got hit with a 3K for his efforts. Romero reversed a 3K into qa DDT at the 20-minute mark. Sho still managed to hit the Shock Arrow, only for Romero to kick out and reverse into a roll-up for another near-fall. The two traded some big moves and scored several near-falls. Sho tried another Shock Arrow, but Romero managed to revere into a small package for the win. Excellent match!

After the match, Romero took the mic and cut a promo putting over Roppongi 3K. Everybody shook hands and hugged for a feel-good ending to a great wrestling show.