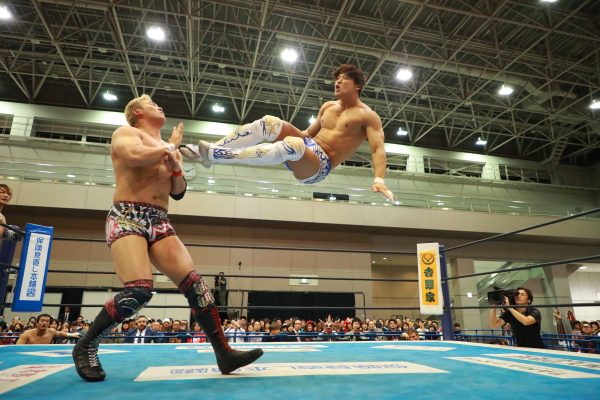 TJP & Karl Fredericks b. Tomoaki Honma & Yota Tsuji when TJP pinned Tsuji with a Detonation Kick – Honma got cut off and worked over before making the tag to Tsuji. For a time, Tsuji held his own against both opponents, but in the end, TJP pinned him with the Detonation Kick.

VoladorJr. & Titan b. El Desperado & Douki of Suzuki-Gun when Titan pinned Douki with a Double Stomp – The heels got the heat on Titan to set up the hot tag to Volador. After Volador cleaned house, Titan got back in and hit the double stomp on Douki for the pin.

IWGP Junior Heavyweight Tag Champions El Phantasmo & Taiji Ishinmori of Bullet Club b. Jyushin Thunder Liger & Clark Connors when Phantasmo with a CR2 – The heels cut off Liger and worked him over with touble team moves. Each man used a top rope back rake. Yes, you read that correctly. Conners got the tag and made a comeback. It didn’t last, as Phantasmo was able to pin him with a CR2.

Los Ingobernables De Japon (Tetsuya Naito, SANADA, BUSHI, & Shingo Takagi) b. Suzuki-Gun (Minoru Suzuki, RevPro Undisputed British Heavyweight Champion Zack SabreJr., Taichi, & Yoshinobu Kanemaru) when Naito pinned Kanemaru with Destino – The two heel stables continued their feud and proceeded to once again take the match to the floor quickly. Kevin Kelly got knocked out of his announcing chair. When the match got back in the ring, Takagi was getting pummeled. Sanada got the hot tag and repeatedly tried to put Sabre in the Paradise Lock. Taichi and Naito traded blows until the rest of Suzuki-Gun got involved and ganged up on Naito this lead to the multi-man brawl that left Naito and Kanemaru in the ring. Kanemaru got a few near falls, but quickly fell to a Destino.

After the match, Naito and Taichi brawled for a bit.

Bullet Club (IWGP Intercontinental Champion Jay White, NEVER Openweight Champion KENTA, & Yujiro Takahashi w/Gedo) b. Hirooki Goto, Tomohiro Ishii, & Toa Henare) when White pinned Henare with a Blade Runner – This time, the babyfaces attacked before the bell. The match went to the floor where the heels got control. Back in the ring the heels worked over Ishii until Henare got the hot tag. after some help from Goto, Henare hit a spear for a two-count. Kenta decked Goto with a right hand, allowing White to toss Goto out of the ring and hit the Blade Runner on Henare for the pin.

Roppongi 3K (Sho & Yoh) b. Tiger Mask IV & Karl Fredericks when Yoh pinned Uemera with a Dragon Suplex – This is the only tournament match of the show. Uemera got worked over before he tagged in Tiger. Tiger was running wild and may have had the match won when Uemera pleaded for a tag. Tiger obliged and Uemera managed to get Yoh in a Boston Crab. Yoh battled valiantly while Tiger kept Sho at bay. Eventually, Sho proke free and was able to make the save for Yoh. Uemera then got several near falls on Yoh as well. However, Yoh still managed to get the pin with a Dragon Suplex.

Hiroshi Tanahashi, Kota Ibushi, Rocky Romero, & Ryusuke Taguchi b. CHAOS (IWGP Heavyweight Champion Kazuchika Okada, IWGP Junior Heavyweight Champion Will Ospreay, Robbie Eagles, & YOAHI-HASHI) when Tanahashi pinned Eagles with a High Fly Flow – Obviously, the story here is Romero is part of CHAOS but is on the opposing team in this match. The Coaches managed to cut off Ospreay for a bit and set him up to get smacked into Taguchi’s butt. Ospreay reversed and escaped to tag in Eagles. The CHAOS team worked over their teammate Romero. Ibushi got the tag and made a comeback. He battled to a double-down with Okada, which lead to Hashi and Tanahashi getting the double-tag. CHAOS teamed up on Tanahashi briefly until he made a comeback and put Eagles in a Cloverleaf. Hashi broke the pin and a multi-man brawl broke out at the 15-mintue mark. Tanahashi was then able to hit the High Fly Flow on Eagles for the pinfall.

After the match, Tanahashi closed out the show with his signature air guitar