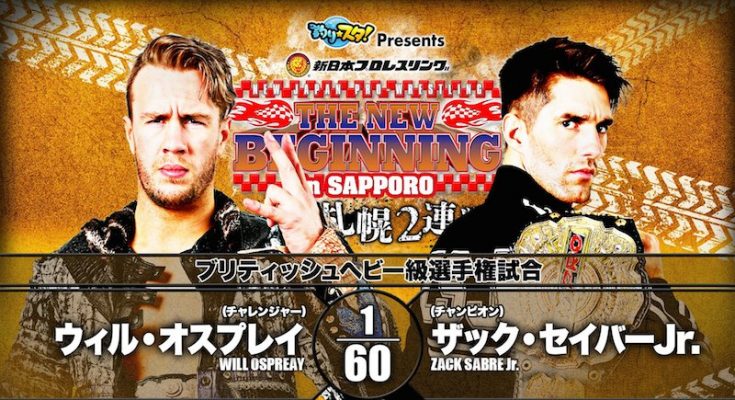 Hiroyoshi Tenzan, Tiger Mask UV, & Manabu Nakanishi b. Togi Makabe, Tomoaki Honma, & Yuya Uemura when Tiger Mask pinned Uemura with a Tiger Suplex – Uemura was criticized by Tiger Mask for not being more aggressive with Nakanishi on night one, so Uemura started this match and immediately tried to slam Nakanishi. This ended poorly and soon resulted in Team Tenzan working over Honma. Makabe made a comeback after getting tagged in. Nakanishi halted the momentum and put Makabe in a torture rack. This lead to all six men in a submission spot and a double down for each man. Tiger and Uemura got the double tag and a multi-man brawl broke out. Tiger hit a Tiger Suplex to get the win for his team.

After the match, Nakanishi cut a promo, telling them this was his final match in Sapporo and thanked the fans for their support.

El Phantasmo p. Gabriel Kidd with a Frog Splash – Unlike most Young Lions, Kidd actually was a pro wrestler for a few years before going to the LA Dojo. Of course, nobody expected him to win this match but that wasn’t the story. This was the young and hungry lion surprising the veteran. Phantasmo still won, but he probably had to work harder than he was expecting to.

After the match, Phantasmo hit Kidd with a CR2 for good measure, because heels are jerks.

CHAOS (Hirooki Goto, Tomohiro Ishii, & Robbie Eagles) b. NEVER Openweight Six-Man Tag Champions b. Los Ingobernables De Japon (EVIL, BUSHI, & NEVER Openweight Champion Shingo Takagi) when Eagles submitted BUSHI with the Ron Miller Special – Ishii and EVIL started and immediately went at it. Ishii seemed to collapse in the corner. The heels took the fight to the floor to gain control. Once the match got back in the ring, Shingo and Goto fought to a double-down. Ishii got the tag and traded several strikes with Takagi, as did Eagles and Bushi. In the ensuing brawl, Ishii and Goto cleared the ring, allowing Eagles to win with the Ron Miller Special.

IWGP United States Champion Jon Moxley, Ryusuke Taguchi, & Roppongi 3K (SHO & YOH) b. Suzuki-Gun (Minoru Suzuki, Yoshinobu Kanemau, El Desperado, & DOUKI) when Taguchi submitted Douki with an Anklelock – Before the bell rang, Suzuki ran into the crowd to brawl with Moxley. Everybody else brawled on the floor as well. Finally, the match got back in the ring with Suzuki and Moxley continuing their brawl. Unfortunately for Taguchi, Roppongi 3K got knocked outside while Suzuki and Moxley brawled. This left him alone with the rest of Suzuki-Gun, who triple-teamed him until Sho and Yoh came to. While the rest of the men brawled, Taguchi was able to make his comeback and get the Anklelock on Douki to get the submission win.

Los Ingobernables De Japon (IWGP Heavyweight and Intecontinental Champion Tetsuya Naito, IWGP Junior Heavyweight Champion Hiromu Takahashi, & SANADA) b. Bullet Club (Jay White, KENTA, & Taiji Ishimori when SANADA submitted Ishimori with a Skull End – Bullet Club attacked before the bell and quickly took the fight to the floor. Once the match got back in the ring, Takahashi was the one getting worked over. Naito got the tag and ran wild for a bit until Kenta stopped his momentum by attacking his shoulder. Sanada rallied for his team which lead to the obligatory multi-man brawl where everybody hit their big moves. When the dust cleared, Ishimori tried to get Sanada in the Yeslock, but Sanada countered into a Skull End.

Revolution Pro Undisputed Heavyweight Champion Zack Sabre Jr. s. Will Ospreay via Ref Stoppage with a Triangle Choke – This marked the first time the Rev Pro title has been defended between two British wrestlers in a New Japan ring. The match started slow with the two trying to feel each other out. The two exchanges several reversals and exchanges without a single highspot for the first 15 minutes. Then about the time Zack started with his kicks the match picked up. At the 25 minute mark, Ospreay hit a Shooting Star for a near fall. An exciting sequence of exchanges and counters ended with Sabre locking in a Triangle Choke/Crossface combo, which caused Red Shoes to call for the bell. It looked like it was ref stoppage and not a submission.

Kazuchika Okada p. Taichi with a Rainmaker – This was billed as a special match, because neither man holds any title. Taichi beat Okada in their one and only singles meeting when Okada was a Young Lion in 2008. However, after each man’s expedition, Okada soared to the main event while Taichi floundered. Taichi attacked from behind before the bell. Okada rebounded and knocked Taichi to the outside. Okada followed up with his trademark bodypress. Surprisingly, Okada was able to maintain his momentum and return the match to the ring. Taichi managed to halt Okada’s offense with a suplex and stalked him for the next several minutes. The match went to the floor again where Taichi tried to hit the Black Mephisto on the ramp, like he did the previous day. Okada escaped and dropkicked Taichi, who tumbled down the ramp to the floor. Back in the ring, Taichi reached for the Iron Glove. Okada dodged and again dropkicked Taichi to the outside. Yoshinobu Kanemaru came to the ring and distracted Red Shoes. Taichi then struck with a gimmicked chair that broke apart on contact. After that, Taichi followed up with an Ax Bomber and used the Stretch Plumb. When that didn’t work, Taichi landed several side suplexes for near falls. Okada slowly made his comeback and the two exchanged several kicks. Okada hit a pair of Rainmakers, but Taichi dodged a third and shoved Red Shoes to the side. This allowed Taichi to low-blow Okada and land several convincing near falls. Okada dodged a Black Mephisto and countered with another Rainmaker. Taichi dodged a fourth Rainmaker at the 30-minute mark and tried for another Black Mephisto. Again Okada dodged and reversed into a Tombstone. One final Rainmaker and Okada got the win.

After the match, Okada cut a promo mocking a Taichi chant from the crowd. He then got more serious and thanked the crowd for their support.