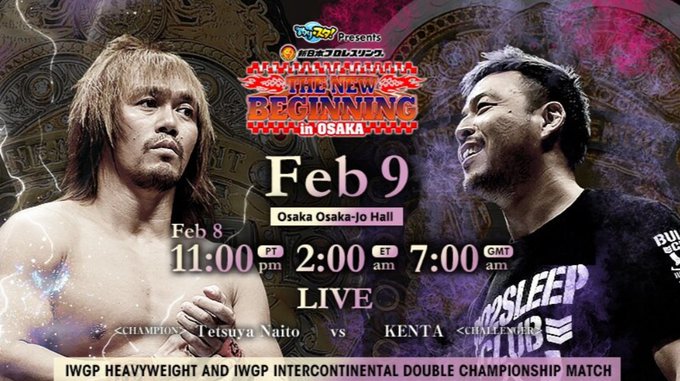 The final night of New Beginning is here, which will have the rest of the major title matches for the tour. Most importantly, it will have Tetsuya Naito’s first defense as a dual-champion.

Yuji Nagata, Hiroyoshi, Satoshi Kojima, & Manabu Nakanishi b. Ryusuke Taguchi, Togi Makabe, Tomoaki Honma, & Toa Henare when Kojima pinned Honma with a Lariat – Taguchi started for his team and demanded to face Nakanishi. This did not bode well for him because any Hip Attacks just bounced off Nakanishi’s chest. Team Taguchi still managed to cut off Nagata and work him over. Nakanishi got the tag and cleaned house until he and Makabe fought to a double-down. Kojima hit Honma with the Machine Gun Chops, but Honma countered with a Kokeshi. A multi-man brawl broke out which saw Kojima hit Honma with a Lariat for the pin.

IWGP Junior Heavyweight Champions Roppongi 3K (Sho & Yoh w/Rocky Romero) b. Yoshinobu Kanemaru & El Desperado of Suzuki-Gun when Sho pinned Kanemaru after a Strong X to retain the titles – The heels attacked before the bell and took the match to the floor. By the time the match got back in the ring, they were focused on Yoh. Kanemaru positioned himself for a Deep Impact DDT but Yoh dodged and tagged in Sho. After a few minutes of running wild, Sho collapsed due to his knee injury. Kanemaru locked in a Figure Four while Desperado kept Yoh at bay. Sho made the rope break, which only resulted in a Deep Impact DDT. Sho kicked out and made his comeback. Kanemaru tried to spit his whiskey on Sho, who dodged and leveled him with a clothesline. Sho hit a Shock Arrow for a near fall. A Strong X later, and the champions retained their title.

After the match, Ryusuke Taguchi came to the ring and said the belts look good with R3K. Then he addressed Romero, saying in English that Rocky is a great coach but a better wrestler. Taguchi suggested they challenge for the titles. Yoh formally accepted the challenge.

Hiroshi Tanahashi, Kota Ibushi, Juice Robinson, & David Finlay b. Bullet Club (Tama Tonga, Tanga Loa, Yujiro Takahashi, & Chase Owens w/ Jado & Pieter) when Tanahashi pinned Loa with a roll-up – A brawl broke out right away with the babyfaces coming out on top until Owens managed to flatten Finlay with a kick. The heels worked over Finlay until Tanahashi got the hot tag. The heels rallied and ganged up on Tanahashi which caused the obligatory multi-man sequence where everybody hit a big move on everybody else. In a surprising twist, Tanahashi rolled up Loa for a pin.

After the match, GOD tried to hit Tanahashi with the Magic Killer. Ibushi made the save and the babyfaces stood in the ring to jaw jack with the heels.

Kazuchika Okada & Will Ospreay of CHAOS b. Taichi & Zack Sabre Jr. of Suzuki-Gun when Okada pinned Taichi with a Rainmaker – During the introductions, it was revealed that Ospreay earned another RevPro title shot after pinning Sabre a few days ago in a tag match. Naturally, the heels took the match to the floor to gain control. They focused on Okada, which lead to Ospreay getting a hot tag. Ospreay and Sabre fought to a double-down. Okada and Taichi got the double-tag. Soon after, a multi-man brawl broke out, allowing Okada to hit a Rainmaker on Taichi to get the pin.

“Switchblade” Jay White p. SANADA with a Blade Runner – This was billed as a “special singles match” since there was no title on the line. Gedo wasted no time distracting Sanada so that White could attack from behind. White then controlled the next several minutes of the match, cutting off Sanada every time he tried a comeback. Eventually, Sanada was able to get White in the Paradise Lock, something he’d been trying to do for weeks. White again managed to cut Sanada off and got a two-count with a Kiwi Crusher. At the 15-minute mark, Sanada rebounded with a back suplex and made his comeback. White held the referee down with a facelock in hopes it would allow Gedo to interfere. That backfired when Sanada intercepted Gedo and knocked him to the floor. He then caught White in the Skull End. However, he missed the moonsault when White rolled out of the way. The two exchanged several near falls with reversals and roll-ups. White managed to dodged another Skull End and hit several suplexes followed by the Blade Runner to finally get the pin.

IWGP Junior Heavyweight Champion Hiromu Takahashi p. Ryu Lee with a Time Bomb to retain the title – This was the long-awaited rematch between the two after Takahashi broke his neck almost two years ago. As expected, the two exploded out of the gate with fast-paced suplexes. The two then had an extended exchange of dueling strikes that eventually ended with Lee getting the upper hand. Le used a headscissors that vaulted Takahashi to the floor and followed up with a dive that sent both men crashing over the announce table. Hiromu responded with a sunset bomb to the floor. They teased a Dragon Driver, which is the move that broke Takahashi’s neck. Instead, Lee only managed a double stomp on the ring apron. Takahashi responded by tossing Lee over his head where he landed on his neck on the floor. The two then exchanged several German Suplexes. Lee got a near-fall with a Package Driver at the 20-minute mark. Takahashi rebounded and hit a Canadian Destroyer. Lee countered with a knee strike. Takahashi dodged and hit a second Destroyer followed by a Time Bomb. Lee still managed to kick out, so Takahashi simply hit a second one to get the win.

After the match, the two met each other’s gaze as the announcers speculated whether the two could function as a team. They also talked about how in the upcoming Anniversary Show, it looks like Takahashi will face IWGP Champion Tetsuya Naito for the traditional Heavyweight vs. Junior Heavyweight main event.

IWGP United States Champion Jon Moxley p. Minoru Suzuki with a Death Rider – Given that both men are heels, it’s not surprising that they began their battle on the floor. The two clashed with chairs like they were swords. Suzuki quickly used the barricade to his advantage and took control of the match on the floor. After several brawls through the floor and the ring, Suzuki Pillmanized Moxley’s arm with a chair. Somehow, Moxley managed to counter by powerbombing Suzuki through a table. The camera made sure to catch that Suzuki was smiling after going through the table. Back in the ring, Suzuki locke in the Rear Naked Choke. Moxley kicked out and made a profanity-laced comeback. Suzuki still managed to kick out of a Death Rider. At the 15-minute mark, Moxley again produced two chairs and dared Suzuki to get to his feet. He broke a chair over Suzuki’s head, but that only caused Suzuki to smile again. Moxley escaped a Piledriver and hit a Death Rider on the chair. The referee had been knocked out in this fray and was unable to make the count. Moxley followed up with a lariat and hit a third Death Rider that finally put Suzuki down for the count.

While Suzuki threw a temper tantrum and started smashing the railings on the floor, Zack Sabre Jr. attacked Moxley from behind and choked him out. Sabre posed with the US Title over Moxley’s unconscious form, firmly establishing that he wants a title shot.

IWGP Heavyweight and Intercontinental Champion Tetsuya Naito p. KENTA with Destino to retain both titles – I don’t think anybody truly thought Kenta was going to win this match. That didn’t stop the entire Bullet Club clan from accompanying Kenta to the ring. Red Shoes tried to get them out of the ring, only for Tama Tonga to shove him to the mat. Red Shoes then kicked all the other Bullet Club members from ringside. Much like Jay White, Kenta did a lot of stalling by getting in and out of the ring before locking up. The mind games did not get to Naito, as he did his Tranquilo pose. Of course, then Kenta charged the ring only for Naito to escape before Kenta could catch him. At last, the two finally went at it at the five-minute mark. The two probably fought more on the floor than in the ring for the next several minutes, with Kenta controlling most of the match. While Naito laid on the floor semi-conscious, Kenta removed the turnbuckle pads in the ring. Naito got thrown into the exposed buckles a few times before making his comeback. Kenta took a neckbreaker on the apron for the obligatory big match apron bump, and managed to counter with an Elevated DDT on the floor. Naito managed to make the count into the ring. At the 25-minute mark, Kenta put Naito in the Yeslock. Naito broke free and landed his Super Hurricanrana. Kenta kicked out of Gloria and shoved Naito into Red Shoes for the ref bump. Jay White ran out and attacked Naito. Bushi ran in for the save, but what met with a Blade Runner. Hiromu Takahashi then ran out to drive White away. Kenta dodged a Destino and tried to counter with a GTS. Naito reversed that into a Destino. Kenta slammed Naito’s head into the exposed buckle and rolled him up for another two-count. Naito, clearly split open from the turnbuckle shot, kicked out of a Psycho Knee Strike. Kenta tried again for the GTS, but Naito countered with a reverse hurricanrana. A Destino later and it was all over.

After the match, Naito took the mic and asked the fans how the first double title defense went. He then mentioned the Anniversary show and how he is looking forward to a match with IWGP Junior Heavyweight Champion Hiromu Takahashi. Takahashi came to the ring and accepted the match.