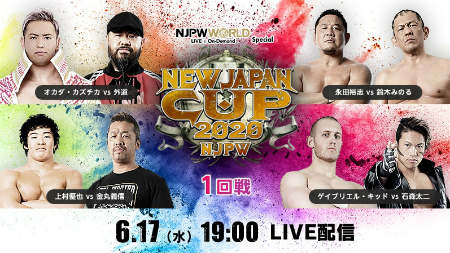 New Japan is back with its second night of the New Japan Cup tournament. The winner will face IWGP Heavyweight and Intercontinental Champion Tetsuya Naito at Dominion for both titles.

Taiji Ishimori s. Gabriel Kidd with a Yeslock – Ishimori came to the ring dressed like Shredder from Ninja Turtles. The two took their time feeling each other out in the opening minutes. Ishimori took control and dominated until Kidd countered a top rope movie with a dropkick, Brian Pillman style. Kidd made his comeback and put Ishimori in a Boston Crab. Ishimori escaped and quickly put on a Yeslock to get the submission

Yoshinobu Kanemaru p. Yuya Uemura with the Deep Impact DDT – Uemura attacked before the bell and took control early. Kanemaru countered by taking the match to the floor and whipping Uemura into the barricade. Kanemaru then spent the next several minutes stalking Uemura. Uemura fired up and made his comeback before getting cut off. Kanemaru went for his whiskey bottle, which got taken away by the referee. Uemura got several near falls with different moves until he was met with a dropkick to the face. Kanemaru followed up with an inverted DDT for a two-count. A Deep Impact DDT later and it was all over.

CHAOS (Hirooki Goto, YOSHI-HASHI, & IWGP Junior Heavyweight Tag Champions Sho, & Yoh) b. Los Ingobernables De Japon (SANADA & NEVER Openweight Six-Man Tag Champions EVIL, BUSHI, & Never Openwieght Champion Shingo Takagi) when Goto pinned BUSHI with a GTR – Yes, Takagi is both the NEVER Openweight Champion and one-third of the Openweight Six-Man Champions. The babyfaces had control until the heels took the match to the floor. After everybody got back in the ring, the heels got the heat on Hashi. Sho got the hot tag and ran wild for a bit. The babyface worked over Bushi until LIJ regrouped and ganged up on Goto. A multi-man brawl broke out where everybody hit their big moves. After the brawling ended, Goto hit Bushi with a GTR to get the pin.

Yuji Nagata p. Minoru Suzuki with a Back Drop Hold – Both men are in their 50s if not close to it and they both tore into each other out of the gate. Suzuki gained control by taking the match to the floor. Back in the ring, Suzuki stalked Nagata and taunted him for several minutes. Nagata made his comebacks and hit several kicks that only accomplished making Suzuki mad. Nagata started focusing on Suzuki’s arm. Eventually, Suzuki caught Nagata in a Rear Naked Choke. Nagat blocked an attempt at a Gotch Piledriver. At the 20 minute mark, the two erupted into an exchange of reversals. In the end, Nagata hit a Back Drop Hold for the pinfall victory.

Kazuchika Okada s. Gedo with a Cobra Clutch – Gedo came to the ring with his arm in a sling and claimed to be unable to wrestle. Of course, it turned out to be a ruse because Gedo hid a spray can in his sling. When that failed, Gedo laid down in the ring and invited Okada to pin him. Okada, sensing treachery was still afoot, stomped on him. Gedo pulled a wrench from his clothing and cheap shotted Okada with it. Then he took Okada to the floor and whipped him into the barricade. Back in the ring, Okada made his comeback until he missed a dropkick. The two went back and forth until Gedo sent Okada into Red Shoes and landed a low blow. With Red Shoes down, Gedo decked Okada with brass knucks. Okada kicked out of a Gedo Lock but missed another dropkick. Jado distracted Red Shoes while Gedo again went for the knucks. Okada dodged and finally hit the dropkick. At the 15 minute mark, Gedo tried to crawl out of the ring to safety. Okada caught him and landed a Tombstone. Okada then finished off Gedo with a Cobra Clutch.