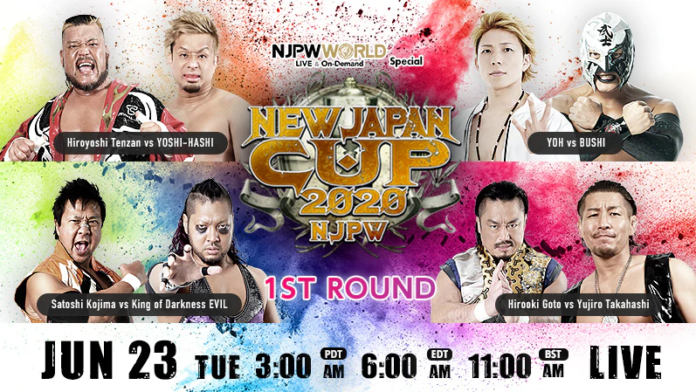 Round One of The New Japan Cup concludes tonight. There have already been a few upsets, so don’t be surprised if a few more happen here.

BUSHI p. Yoh with an MX – Yoh got the upper hand and knocked Bushi to the floor. He followed up with dive. When the match went to the floor a second time, Bushi turned the tide by whipping Yoh into the barricade. Bushi then controlled the match for the next few minutes. Yoh escape an MX and made his comeback. He got a two count with a German Suplex. Both men exchanged strikes and kicks that ended in a double down. Bushi hit a Codebreaker for a near fall. Yoh hit a DDT and put Bushi in a Calf Crusher. Bushi escaped and it two more Codebreakers before finishing Yoh off with an MX.

YOSHI-HASHI s. Hiroyoshi Tenzan with a Butterfly Lock – The two were fairly evenly matched early on, despite the weight difference. Even though both men were babyfaces, the match still spilled to the floor. One they got back in the ring, Hashi was in control. Unfortunately for him, he tried a headbutt on Tenzan and only hurt himself. Tenzan made his comeback and the two battled atop the turnbuckle. Hashi got a near fall with a sunset flip from the top. Tenzan escaped a Fisherman Buster with a headbutt of his own. Tenzan went for the kill with a moonsault but Hashi dodged. Hashi then tried a Swanton but Tenzan dodged. The two exchanged chops until Hashi decked Tenzan with a lariat. Hashi hit a Blockbuster before putting him in the Butterfly Lock. Tenzan got the rope break and managed to put Hashi in the Anaconda Vice. Hashi reversed into a pinning combination, forcing Tenzan to release the hold. Hashi immediately clamped on the Butterfly Lock again. This time, Tenzan submitted.

CHAOS (Kazuchika Okada, Tomohiro Ishii, Toru Yano, & Sho) d. Los Ingobernables De Japon (IWGP Heavyweight and Intercontinental Champion Tetsuya Naito, IWGP Junior Heavyweight Champion Hiromu Takahashi, NEVER Openweight Champion Shingo Takagi, & SANADA) when Yano and Takahashi were counted out – Wow that’s a lot of names to type. When the bell rang, Yano offered a handshake. Takahashi refused and insisted Yano had weapons hidden in his tights. The referee got Yano to surrender a spray bottle and clippers. It was almost five minutes into the match before any actual wrestling happened. Sanada and show went toe to toe until Takagi kicked Sho from behind. LIJ worked over Sho before Ishii got the hot tag. Takagi and Ishii fought to a double down. Okada and Naito got the double tag and they two battled to a double down. This time, Takahashi and Yano got the respective tags. Yano chased Takahashi around with the clippers like he was trying to shave his head. The referee began the count. Yano tied Takahashi’s feet together to keep him from escaping. Okada ran out and pleaded for Yano to get back to the ring. However, Yano didn’t listen and both men were counted out.

Hirooki Goto p. Yujiro Takahashi (w/Jado) with a GTR – Goto dominated early, causing Takahashi to go to the floor in frustration. Eventually, Goto chased him around the ring where Takahashi leveled him with a lariat. Once Goto got back in the ring, Takahashi went on the offensive. However, Goto refused to stay down and made a comeback. Goto lifted Takahashi for a Ushigoroushi but Takahashi escaped by raking the eyes. Takahashi hit a superplex for a near fall. Goto hit the Ushigaroushi for a double down. The two traded a few more moves, with Goto hitting an elevated GTR. Goto tried to fish off Takahashi with another GTR, but Takahashi grabbed the referee. Jado took the opportunity to hit Goto with a shinai. Goto still kicked out of a pinfall attempt. At the 15 minute mark, Takahashi went for the Pimp Juice DDT. Once again, when Goto countered he got raked in the eyes. Jado distracted the referee so Takahashi could try to use his cane. Goto blocked and set Takahashi crashing into Jado. A GTR later and it was all over.

EVIL p. Satoshi Kojima – The two matched each other toe to toe until Kojima tried a plancha to the outside. Evil dodged and Kojima crashed to the floor. Evil did his trademark double chairshot before bringing the match back into the ring. Evil worked over Kojima for the next several minutes. Kojima made a comeback and hit the Machine Gun Chops. The two battled on the apron where Kojima hit a DDT. Surprisingly, Kojima was actually able to hit his top rope elbow for a two count. A top rope Koji Cutter got another two count. Evil reversed a suplex into a Fisherman’s Buster. The two collided with lariats, but only Evil fell. The two leveled each other with several lariats with neither man getting the pin. In the end, Kojima tried for another lariat but got hit with Everything Is Evil.