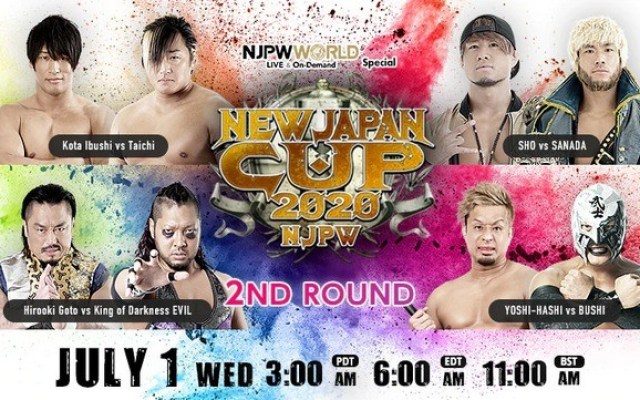 The second half of Round Two will be concluded tonight. Several interesting matches tonight, considering the number of upsets that happened n Round One.

YOSHI-HASHI p. BUSHI with Karma – Bushi came to the ring dressed like a cross between La Parka and Deadshot from DC Comics. He attacked Hashi from behind to jumpstart the match. Hashi quickly turned it around, and he and Bushi had a battle of chops. Hashi grounded Bushi and tried to keep him down with holds. Bushi countered and knocked Hashi to the floor. He followed up with a dive to the outside, but then surprisingly did not brawl on the floor. He actually threw Hashi back in the ring to continue the assault. Bushi went for an MX but Hashi countered with a lariat. Hashi capitalized and put him the Butterfly Lock but Bushi made the rope break. Hashi went for the kill with a Fisherman Buster. Bushi countered into a crucifix pin attempt. Hashi kicked out and hit Karma for the pin.

SANADA s. SHO with a Skull End – Both men are very athletic, so it wasn’t surprising that the match kicked into high gear early on. It wasn’t until the match spilled to the floor that Sanada took control. He worked over Sho’s knee to keep him grounded. Sho eventually got on his feet and battled Sanada with strikes. He used submissions of his own on Sanada, which ended with Sanada escaping a cross-armbreaker with a powerbomb. At the 15-minute mark, the two got into a battle of strikes. Sanada tried a hurricanrana but Sho reversed into a Backstabber. Sho went for the kill with a Shock Arrow, only for Sanada to escaped and use a Skull End. Sho made several attempts to escape before finally getting free by reversing it into an armlock. The two traded several finisher reversals, with Sho trying for the Shock Arrow and Sanada trying for the Skull End. Eventually, Sanada flipped off the turnbuckle and caught Sho in another Skull End. This time, Sho submitted.

Los Ingobernables De Japon (IWGP Heavyweight and Intercontinental Champion Tetsuya Naito, IWGP Junior Heavyweight Champion Hiromu Takahashi, & NEVER Openweight Champion Shingo Takagi) b. Tomohiro Ishii, Toru Yano, & Yota Tsuji when Takahashi submitted Tsuji with a Boston Crab – Tsuji was an odd addition to this match because he helped Takahashi beat Yano last night by shoving him into an elevator. Of course, Yano wanted to start the match with Takahashi, who refused. After getting chased around the ring by Yano, he managed to tag in Takagi. A multi-man brawl broke out with only Takagi and Tsuji in the ring. The heels managed to take out the other babyfaces and focused on Tsuji once they got back in the ring. After getting worked over for several minutes, Tsuji managed to tag Ishii. who went back and forth with Takahashi. At the ten-minute mark, Tsuji tagged back in and got a near fall on Takahashi. Tsuji went for a very weird looking submission, but quickly another multi-man brawl broke out. Again the heels ganged up on Tsuji. Takahashi proceeded to use the Boston Crab to submit him. The story being that Takahashi used a Yyouug lion’s finisher to beat a young lion.

TAICHI p. Kota Ibushi with Black Mephisto – Taichi came to the ring with Zack Sabre Jr., while Ibushi was accompanied by Hiroshi Tanahashi. taichi offered a handshake that Ibushi refused. Sabre yelled something at Isbushi which distracted him long enough for Taichi to attack from behind. Taichi knocked Ibushi to the floor where Zak pounced on him. Tanahashi broke up the attack, which lead to a brawl around the ring between Taichi and Ibushi. By the time they got back in the ring, Taichi was in control. Ibushi fired up and exchanged kicks with Taichi, which eventually resulted in a double-down. Ibushi landed a powerbomb for a two-count. When Ibushi went for a Kamigoye, Sabre again got on the apron. This distracted the referee and allowed Taichi to hit a low blow and roll up Ibushi in a Gedo Roll. Ibushi kicked and the two clashed with more strikes and kicks. Ibushi reversed a kick into an inverted Package Piledriver for another hear fall. Again, Ibushi went for the Kamigoye. But this time, Taichi used the referee as a shield. With the referee down, Sabre attacked Ibushi. Tanahashi made the save and chased Sabre around the ring. Ibushi went after the fallen Taichi, but it turned out Taichi was playing possum. Taichi hit him with the iron claw and hit Black Mephisto to get the pinfall.

This means Taichi pinned both tag team champions in the tournament. After the match, Taichi stood over the fallen Ibushi and held up both belts.

EVIL p. Hirooki Goto with Everything Is Evil – EVIL made his way to the ring but stood in front of it so he would be face to face with Goto when he came out. When Goto appeared, the two immediately began brawling around the floor outside of the ring. One the match got in the ring, the two exchanged shoulderblocks and lariats before returning to the floor. Evil took control of the match by whipping Goto into the barricade and using a chair. Back in the ring, Evil dominated for the next several minutes. Goto hit a lariat and made his comeback. After exchanging several blows and moves, Goto hit an Ushigoroushi for a double down. The two battled to their feet and exchanged dueling strikes., which soon became dueling lariats, and eventually dueling finisher reversals. Goto went for the GTR, but Evil shoved Goto into Red Shoes. With Red Shoes down, Evil stomped on Goto and landed a low blow. Goto still kicked out, but he then fell to Everything Is Evil.

After the match, Evil cut his usual “This is evil” promo.