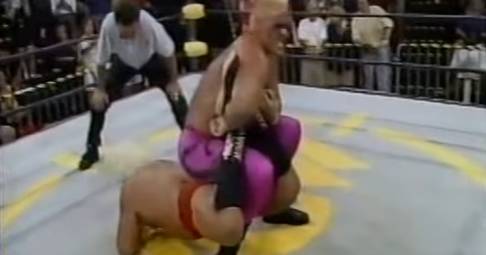 July, 1994 – World Championship Wrestling had done the unthinkable. They had signed multi-time WWE Champion Hulk Hogan to a long term deal. Finally, fans would see an actual dream feud between the two legends.

In the build up to the dream match, Hogan made one of his initial WCW appearances on WCW Saturday night, then the flagship show of the Turner owned promotion. He sat at ringside to watch Sting take on Ric Flair in a non-title match.

Previously, Sherri Martel interfered in the title unification match between WCW Champion Flair, and International Champion Sting. She allied herself with Flair, and helped make him the Unified WCW World Champion. As a result, Sherri was barred from the building for this rematch.

Tony Schiavone and Bobby “The Brain” Heenan call the action for what was one of the most memorable moments for WCW in 1994.